Despite a big surge from India, the US saw yet another decline in overall shrimp imports in July, reveal the latest data from the National Oceanic and Atmospheric Administration.

Note that the average paid for shrimp in June 2018 was $8.79 per kilo, so the price was still descending.

The reduced price of shrimp seen in the first half of 2018, due in part to double-digit supply growth from India, Indonesia and other countries, is going to stick around for a while, Gorjan Nikolik, Rabobank’s associate director for animal proteins and seafood, predicted in a report issued last month.

Many shrimp farmers are operating at a loss or very low profit margins, but their cost of doing business has not shrunk, he said. 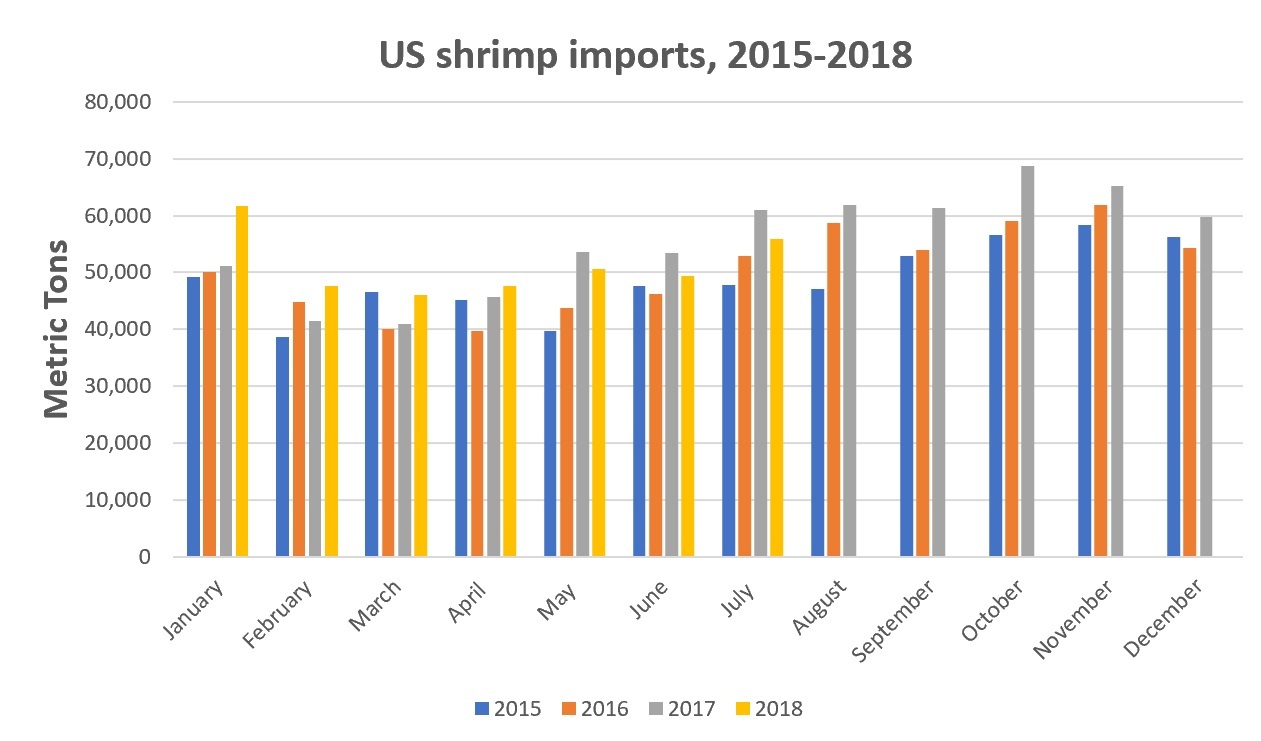 When it comes to India, the US’ number one source of shrimp, the supply growth rate should continue to slow, but it will remain strong as new regions in the country come on, Nikolik said.

One thing helping Indian shrimp exporters is the drop in the value of the Indian rupee. It has breached the IND 70 per US dollar mark, as reported recently by the Business Standard. The change comes as prices for vannamei shrimp raw material in India move up fast. 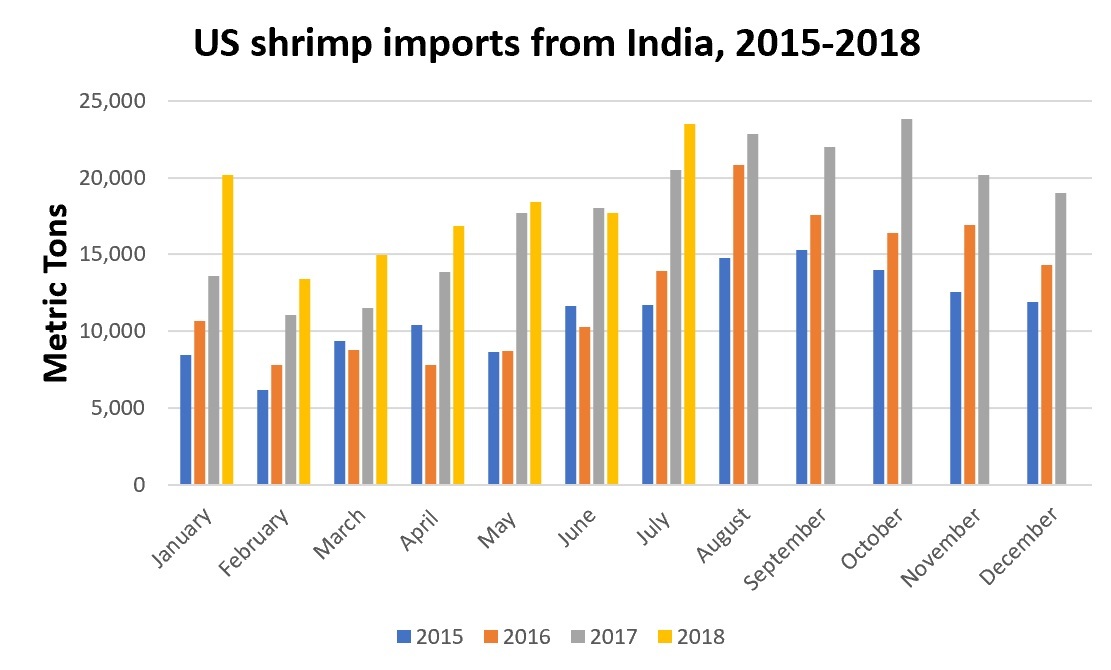 Land of smiles not so much

But India’s y-o-y increase of shrimp exports to the US was a big outlier during the month of July. Nine of the US’ 14 largest shrimp source countries instead sent it less.

Thailand’s shrimp troubles go back to its bout with early mortality syndrome (EMS), the disease that hit farmers in China and all throughout Southeast Asia between 2009 and 2013. Before that Thailand was a dominant source of shrimp for the US and had 25,000 farmers, Suraphol Pratuangtum, president of the Thai Marine Shrimp Farmers Association, said in a recent joint presentation with a Novozymes Biologicals representative in Chang Mai, Thailand.

Today the country known as the "Land of Smiles" has 7,000 farmers and, due to continued consolidation, will soon have just 6,000 farmers, he predicted. Also, the remaining farms are using smaller areas and producing less, he said. Thailand now produces 300,000t annually, half of what it produced before the EMS disaster.

So far, for the year, shrimp imports from Vietnam are off by 8% compared to 2017.

The fact that the majority of Vietnamese shrimp are being grown by smallholders on relatively old-fashioned farms is holding the country’s production back, Ho Quoc Luc, chairman of FIMEX (Sao Ta Seafoods Joint Stock Company) and former chairman of Vietnam’s Association of Seafood Exporters and Producers, explained at the Vietfish conference, in Ho Chi Minh City, in August.

Also, there’s little incentive to grow shrimp in Vietnam as the prices being paid are equal to the cost of production. Size-50 vannamei shrimp were fetching VND 105,000 ($4.51 USD)/kg and size-60 getting VND 95,000 last month. Those prices are roughly VND 20,000 lower than they were a year ago. 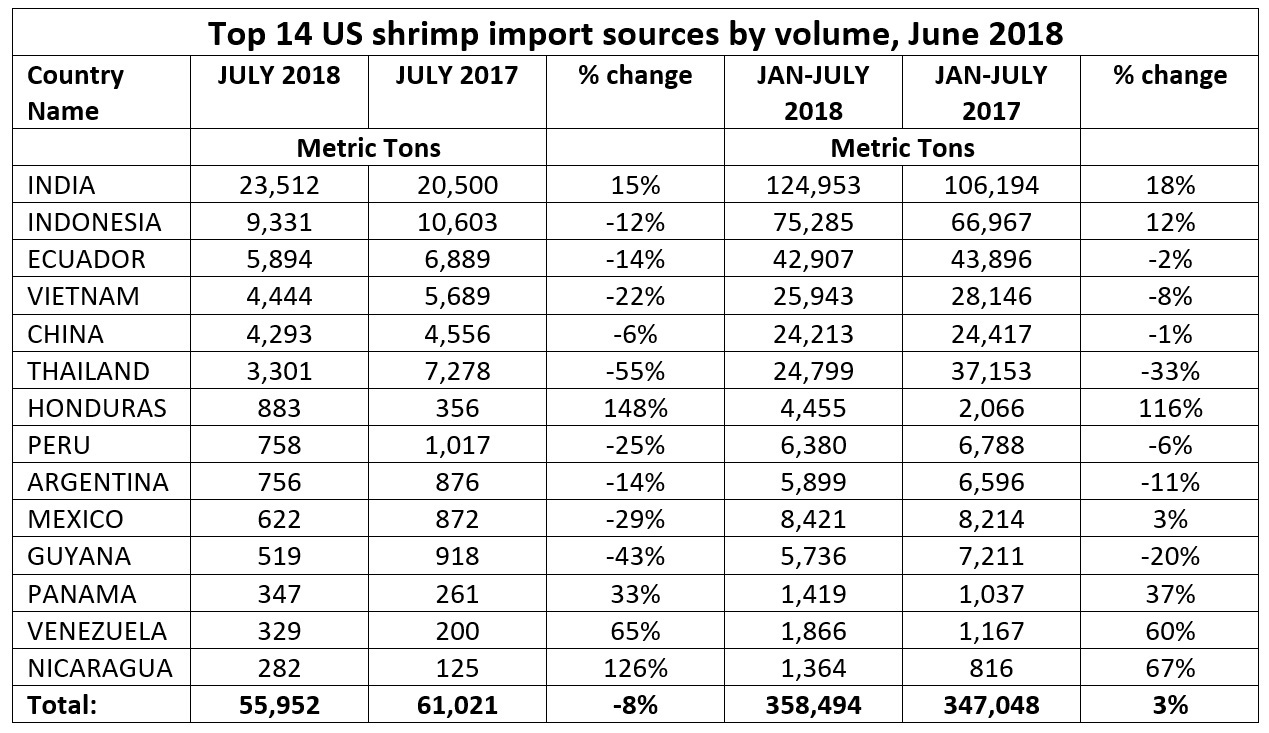